Nouriel Roubini AKA Dr. Doom did it again. His tweet released on August 23 where he compares gold values to Y2K tech bubble has quickly sparkled reactions among analysts and other pundits.

Among them, the strongest critic comes (no suprise!) from Adrian Ash of  BullionVault, the world’s No.1 gold ownership and trading service:

[Roubini says that] Gold is a dumb thing to buy. Because it’s a bubble, plain and simple and always.

“Since gold has no intrinsic value,” says Dr.Doom, “there are significant risks of a downward correction.

Oh sorry – that was him way back in December 2009, not here in August 2011. Gold Prices have very nearly doubled since then, despite having no value to New York University economists. But no matter. It’s what happens next that counts.

Uh-oh! Then Ash puts in evidence what I think is really is a macroscopic error by Roubini. In his tweet he had linked a chart comparing gold in tha last ten years vs. Nasdaq in the 90s, asserting that there is nothing new under the sun: gold is in a big bubble just like tech stocks 10 years ago. 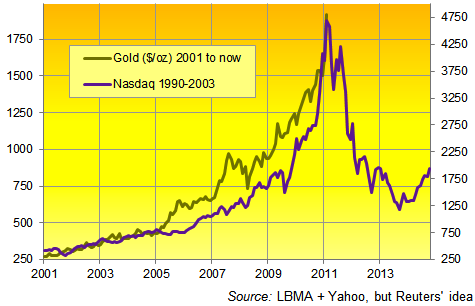 What Ash notes is quite obviuos:

This chart is more than simply “time-adjusted” (as he claims) in mapping the “gold bubble” onto the “Nasdaq bubble”.

Note, for instance, that its vertical axes show nominal prices (Dollars per ounce for gold, index value for the tech-stock Nasdaq). That overplays gold’s relative gains, now running at 6-fold since the chart’s starting point. The Nasdaq, at its top of only a few months earlier, you’ll recall, towered more than 10 times higher from a decade before.

That said, in my very humble opinion, gold is due for a correction. It would be a non-event to see a sudden drop in gold. This would actually be a healthy development for markets by shaking out the short-term speculators while the long-term story remains on solid ground.

Frank Holmes, contributor of seekingalpha, is on the same path. He has written a very good article on The Neverending Story of a Gold Bubble, indicating many fundamental reasons that could pop the “gold bubble” talk without using complicated charts or angry words: if you are interested in this subject you should definitely take a look at it.